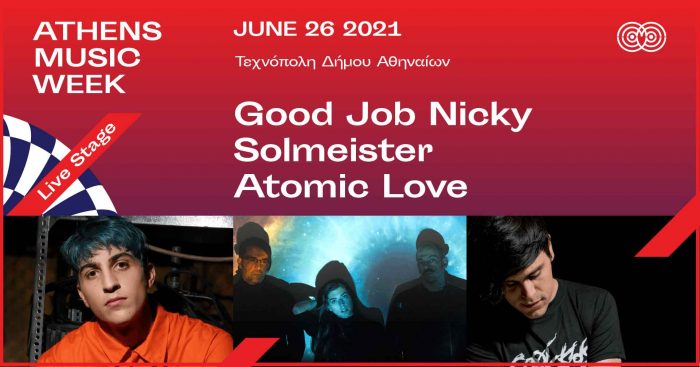 Athens Music Week 2021 will culminate with a live show on the main stage of Technopolis on the 26th of June, featuring Greek artists who made an impact, climbed to the top of the charts, became viral sensations, and ruled the social media this last year.

Good Job Nicky, the “next urban pop star”, in his first live performance!

Good Job Nicky released his debut album in October 2020. His single “January 8th” became an instant trend in Youtube reaching 2 million views to date, while its Shazam searches skyrocketed and sent this pop single to the top digital charts. The single has been added to over 2,000 playlists on Spotify, and has gained support in large territory markets like Italy, Turkey, Romania, and Israel. Now, it’s time for the 25-year-old artist from the island of Paros to step onstage for the first time in a major concert venue, and unveil the persona that has attracted audiences worldwide.

The beloved “prince” of audiences of all ages, speaks straight to the heart with his experiential lyrics and multidimensional sound, a fusion of rap, punk and emo entraining in its path a whole generation of teenagers! His latest album, “See you in hell” which came out in 2021, finds him exploring a new, darker era, by revisiting his emo roots. In a unique musical show, accompanied by the Cool Kids Never Die full band, Solmeister performs live after a long time, for a tribute to all that‘s happened, an ode to what’s going on and an introspective vision of what’s about to come.

Dream pop melodies, psychedelic guitars and loops aplenty create the musical world of Atomic Love, who published their debut album “Vol/1” in 2021. This up-and-coming trio, Eva Vasilonikolou (vocals, loops, lyrics), Panos Liapis, (guitar) and Paulos Morfis (keyboards), have been very active in the concert field, and are definitely one of the most well rounded, ambitious and promising bands of the indie pop scene. Inspired by artists like Bjork, Αlt-j, Radiohead, London Grammar, Portishead, Florence and the Machine, they attempt to explore the absurd, the evolution and the self-destruction in romantic relationships.

Attendance is free, however seats must be reserved beforehand at www.viva.gr (starting on 14/06)

The concert will also be livestreamed for free at athensmusicweek.gr

More about the artists:

We use cookies to ensure that we give you the best experience on our website. If you continue to use this site we will assume that you are happy with it.OkPrivacy policy